About Kyle of Peek Pools & Spas 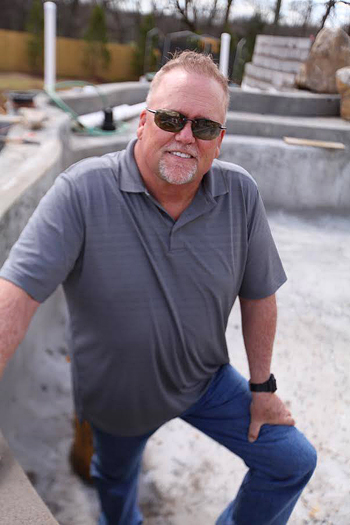 As the patriarchal star of the DIY Network hit, Pool Kings (three seasons available now), Kyle Peek is still settling into his new-found celebrity. The owner of Tennessee-based Peek Pools has built more than 10,000 pools in his 40+ year career, boasting a clientele of some of America’s famous and wealthy, and winning several awards for his work in the pool industry. Still, the happily married father of three is most proud of his familial achievements and the relationships he’s been able to build with others throughout his career. “More than building the pool is the relationship we build with each homeowner and the bond we share with them when they allow us to be part of their family for awhile, and being given the opportunity to do something special that will last a lifetime.”

Outgoing and quick-witted, Kyle’s sense of humor and affinity for banter is best seen in his interactions with his sons, Justin and Corey - both of whom work for the family business and can be seen on Pool Kings. “Building pools with family is a dream of mine and something I’m very proud of. However, it can also be challenging and incredibly stressful. Our ability to poke fun and engage in some friendly competition, which can be seen a good bit on the show, allows us to keep things light in the most stressful times.”

Fun and sarcasm aside, Kyle’s natural warmth and humility is equally as prevalent in his work. “We care - we truly care about what we build and the people we build it for.”

Kyle’s down time is spent with his wife, Miki, his children and grandchildren. “I love to cook, listen to music, golf…The more I can do with my family, the better.” He also spends a good amount of time giving back, working with the Special Olympics, citing his faith and his stepdaughter’s disabilities as his inspiration for helping others.

“I have been Vice President Director of Operations for the largest pool company in the country, with hundreds of people under me. I’ve also mixed cement for $25 a day and picked up trash. I’ve been at the top of the ladder, I’ve been at the bottom of the ladder. I’ve seen the pool industry at its best and I’ve seen it at its worst. I’ve won awards and built pools for some of the wealthiest clientele in the world. And now I’m on a hit TV show. But working with my family, for me, has been the most rewarding achievement I’ve had.”